How Latinx In Gaming is uniting a community

The final weekend of last year’s annual Hispanic Heritage Month was an exciting time for the non-profit group Latinx In Gaming (LIG). The group hosted its first-ever Unidos Online event on Twitch, which featured dozens of panels, game jams, roundtables, and more from October 9 to the 11. “A lot of the feedback we got was like, ‘this is so cool.
Gamecrate Link to Story

In August of 2018, 21-year-old Anthony Vargas was killed after being shot over a dozen times in the back, including twice in the head, by East L.A. sheriffs. He was one of 15 people in East L.A. that year who died of gun-related homicide, whether victims of crime, gangs, police or unknown circumstances leading to their deaths.
KCET Magazine Link to Story

Pacifico Dance Company: Sharing the Love of Traditional Mexican Dance Around the World

See the Mexican roots of Los Angeles on "Lost LA" S2 E1: Borderlands. Watch now. The Democratic People’s Republic of Korea was one of the last places on Earth that Adriana Astorga-Gainey expected to find herself visiting at any point of her life. Yet, in 2001, she and five dancers from the Pacifico Dance Company, the non-profit dance company that she founded nearly 30 years ago, found themselves in North Korea, as well as in the People’s Republic of China, for a cultural arts exchange program.
KCET Magazine Link to Story

Explore the interconnected lives of three people who lived through California's transition from native land to Spanish colony and from Mexican province to American state on "Lost LA" S2 E1: Borderlands. Downtown Los Angeles isn’t what it was a century ago, but the ghosts of its past still haunt the streets.
KCET Magazine Link to Story

How video game companies are responding to the COVID-19 pandemic

It has been nearly a month now since the announcement of a national emergency over the outbreak of the COVID-19/Coronavirus pandemic. The pandemic, which began in China, has brought the world to a standstill as numerous countries have implemented quarantine and social distancing measures to mitigate infection.
Gamecrate Link to Story

Death Stranding in the time of social distancing

It comes as no surprise that fans of Death Stranding, Hideo Kojima’s latest digital opus, have noticed some real-life parallels between the game and the current global response to the COVID-19/Coronavirus pandemic. Talk about being on the nose! Most of these parallels have been on the ironic, humorous, and creative side.
Gamecrate Link to Story

The week before any kind of rivalry match is typically full of tension, nerves, and anxiety. This was especially the case with the build-up for El Tráfico de Los Ángeles: the L.A. Galaxy versus LAFC. The trash-talk and banter between fans, supporters, and even players eventually took a backseat on Wednesday night when the heartbreaking news of ticket cancellations for Friday’s match flooded social media.
Link to Story

Before the L.A. Galaxy, Chivas USA, or LAFC, We Had the Los Angeles Aztecs

Though officially just a few months old, the Banc of California stadium in Exposition Park holds more than a half-century of history. The stadium sits atop what was once the Los Angeles Sports Arena, whose history is immortalized on dozens of plaques along the new stadium’s walkway. These plaques are a reminder of the days when the area hosted some of the biggest names in music and sports.
Link to Story

Legendary Mexican Photographer Gets Her Own Graphic Novel

At 75 years old, Graciela Iturbide refuses to slow down. In fact, she’s about to become more relevant than ever. The legendary Mexican photographer will have her work displayed in two exhibits this month: at Scripps College “Revolution & Ritual: The Photographs of Sara Castrejon, Graciela Iturbide, and Tatiana Parcero” and the Hammer Museum’s “Radical Women: Latin American Art, 1965-1980”.
KCET Magazine Link to Story

The links between hip-hop and indigenous people aren’t obvious at first. What could pop-locking, graffiti-tagging sneaker heads possibly have in common with peoples whose cultures date back centuries in the Western hemisphere? But as some of the artists performing at the Hip-Hop: First Peoples, New Voices event at Grand Performances explain it, the links and parallels are abundant in the music, the art, the narratives and the dances.
LA Weekly Link to Story

Henry D'Arthenay sits in the living room of his new apartment in Mexico City, thousands of miles from his hometown of Caracas, Venezuela. We're a few weeks shy of four years from when the singer-guitarist for Latin rock group La Vida Bohème spent two hours with me on Skype, explaining the massive protests in Caracas after an election placed the deceased Hugo Chavez's chosen successor, Nicolás Maduro, in the presidential seat.
LA Weekly Link to Story
View More Stories

Ivan Fernandez is a writer, photographer, and graduate student researcher at San Diego State University. He has nearly 20 years experience working as a journalist, writer, and photographer and continues to cover numerous topics related to the arts, culture, history, and sports of Latin America and the Latinx diaspora across the world with a focus on those living in the United States of America. His work has appeared in various online and print publications including FLAUNT, L.A. Taco, KCET Artbound, LA Weekly, Coachella CAMP magazine, Remezcla, Gamecrate, Panamerika, MTV Iggy, and others. His research at SDSU focuses on the ethnography of association football (soccer) fandoms/fans through the complex and interrelated relationship between the sport, art, culture, history, and politics as a means of creating and influencing such fandoms. He received his Bachelor of Arts in Mass Communications from California State University San Bernardino (2004). He often writes under the pen name "Afroxander." 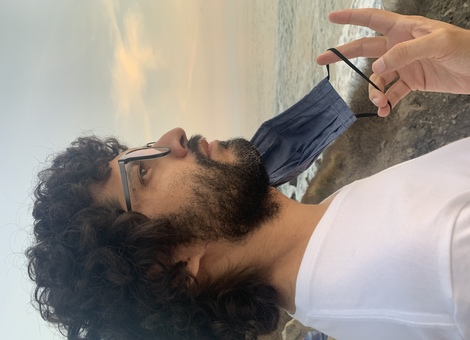